We have 160 guests and no members online

This is quite a difficult blog post for me to write, but I’d like to tell you about the passing of one of my very dearest friends, Gandalf the Golden Retriever.

Gandalf was the very essence of sunshine itself distilled into the most beautiful golden dog shape.

We called him “the love trolley”. You know how some fancy restaurants have a dessert trolley that they bring round after dinner and everyone gets a helping of something delicious? Well Gandalf was like that… he’d go round the room giving everyone a great big, big helping of love. Unlike a desert trolley, however, one would not just get one helping… Gandalf would just go round and round all night making sure everyone was loved right up!

And if Lisa and I ever had a disagreement, no matter how small, Gandalf would be there, sitting between us, giving us both EXTRA love and attention to help us to find peace. You’d be amazed how hard it is to concentrate on feeling “wronged” when you’re getting huge Golden Retriever loves and kisses non-stop!

Truly, I believe that Gandalf was possessed of a remarkable talent for transforming negative energy into peace and joy. I saw it over and over again in the 13 years that I was blessed to know him. He would purposefully put himself where the distress was and… perhaps absorb that energy and somehow transmute it… and the world would be lighter and brighter for the fact that he had been there.

He might have been “just a dog” but inside there was someone truly gifted at catalysing love.

And the great love of Gandalf’s life was Zing. From the very moment we brought Zing into our home as a new puppy, Gandalf felt he had a NEW PURPOSE, and that purpose was to be Zing’s EVERYTHING. And he was. He loved, cared for, protected and raised that little pup into the amazing dog that Zing became.

They were inseparable right to the very end. Zing regularly napped right on top of Gandalf. Here, in one of the very last pictures of Gandalf, taken the day before he died, is Zing in a very customary position. 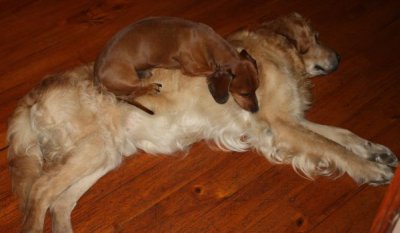 And it certainly was a two-way love affair. Zing used to groom Gandalf - giving him “nibbles” that equated to kisses. Whenever he did, Gandalf would hold dead still and get a far-away look in his eyes. Even on the day before he died… 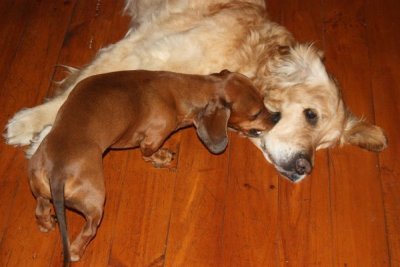 And of course it wasn’t just Zing that loved Gandalf. We all did. One of my neighbours said, “Gandalf isn’t a dog… he’s a phenomenon!”

And it was true. A veritable phenomenon of sunshine and love. Golden of coat and golden of heart.

I didn’t know that this would be our last “couch snooze” together. He loved these moments. You see, he noticed that Zing would get picked up and put on my lap and cuddled. And so he also wanted to be picked up and put on my lap. He wanted “his turn”. So, years ago I began doing exactly that. Every now and then I’d pick him up and carry him around, just as if he were a small dog. It was most uncomfortable for all concerned, but he absolutely loved it because he was getting his “turn”. And then there we’d sit, him on my lap like a small dog “getting his turn”. I’d wait for him to say “enough” and get off. That was the deal if he was “getting his turn”… it lasted until he’d had “enough”. So he’d just settle in and soon enough I’d relax, close my eyes and we’d just cuddle.

I always thought he fell asleep in these moments, he lay so still. But no. He was just there, BEING LOVE. Over the years Lisa snapped a number of pictures just like this: Gandalf lying on top of me, wide awake but blissed out. Me somewhere between awake and asleep. And yes, eventually he would have enough and he’d gently get off of me.

There is so much more I could tell you about Gandalf. About the way he gobbled life up in great delicious chunks. He loved everything. He loved everyone. And if you were around, you’d be next. The way he was always so kind and gentle with little children. They way he’d run in the park (and later on our farm) with all four legs flying. The way he took his job of being a watch-dog seriously but never quite understood it (because strangers are just people we still need to make friends with, right?). They way, despite that, he bravely defended Lisa and woke me up on the day we had an intruder in our house. There is so much I could say about this beautiful spirit…

And then, in October last year (2014), Gandalf had a series of three heart attacks. Each one knocked him down to the point where, for a few days he couldn’t stand or even lift his head. With each attack we thought that was it. But then, he’d fight his way through it and make a come-back; seeming to be okay-ish afterwards. But each attack hit him harder than the last and each recovery was less successful than the last. And then, in early November, he had a fourth attack. It was terribly severe. He survived, but was in great discomfort and there was no hope anymore that he’d ever recover.  We couldn’t watch him suffer anymore. We took him to the vet and, with my beautiful Golden boy’s head cradled in my arms… I said goodbye to one of the best friends I have ever known.

Damn, it is hard to say goodbye sometimes.

Now I KNOW all the good stuff about how this is only a temporary separation and how I will see him again when I too transition. I KNOW his spirit is still around and Lisa and I have even been in contact with his entity during meditation. But, for all that… it is still damn, damn hard to let go of someone you love.

There are no words or ideas to take the grieving away. It just is what it is, and needs to be processed.

And we did process. Lisa and I moved through the stages of grief and found our way, eventually, to a kind of acceptance.

Zing, however, did not. The poor little guy was just disconsolate and did not seem to be improving at all. If I left him at home when I went out, Lisa reported that he’d sit at the door and literally HOWL for hours until I returned. So I began taking him EVERYWHERE with me.  Lisa made a special sling bag that allowed me to carry him and have my hands free. But, even with me, he was far from happy. He was mainly just listless and disinterested.

He got all kinds of special attention and we took him for extra walks and loads of visits to neighbours who have dogs for him to play with. But nothing helped.

We gave him special treats, but he wasn’t interested and lost his appetite. Which was balanced by the fact that he didn’t want to do anything anyway.

The Zing I knew and loved was disappearing before my very eyes, leaving a small, sad, lost little dog that was utterly disinterested in life.

Lisa and I had many discussions about this. Lisa was too heart-sore to want to get another dog. But, eventually, we agreed that Zing needed a friend.

I’ll tell you about that in a following post titled, “Hello Pikachu!”

But, in closing, what I’d like to say is that I have come to realise that it is trite but true: you really don’t know what you have until it is gone. And it was amazing how much space there suddenly was in our home where Gandalf wasn’t. How much light and love and joy he brought… even when he was ailing and dying.

There is nothing really to be done with this information other than to repeat the same choices that have often been expressed in spiritual literature everywhere: to live life as consciously as possible, to remember to find gratitude for all in life that is good and beautiful and to love those around you fiercely while they are there.