We have 294 guests and no members online

As reported in my last blog post, “Goodbye Gandalf”… Zing was not coping with the loss of his dear friend, Gandalf, and Lisa and I were considering getting him a friend.

It is my practice to take all of my life’s big decisions to my Inner-Self and my Spirit-Guide in meditation. And bringing someone new into our home is certainly a big decision. So it was that I meditated upon this. I won’t go into all the details, but I found myself in my meditations in a garden with my Spirit-Guide, 8, at my side. We brought Zing into the garden and he seemed like a small boy… except he had a mane of hair like a lion’s (I don’t know why… that’s just the way he looked in my meditation).

So, in my meditation, I asked 8 if there was a being that would wish to express itself into dog form that would be the right match for our needs: a perfect friend for Zing and the right energetic complement for Lisa and myself too.  He said that there certainly was one such, and then into this space came another being. What I “saw” looked to me like a small girl with sharp facial features. But she moved fast. Almost in a blur. And there was so much energy it almost crackled off of her. And as she came into the space and Zing noticed her, he lit up. He leaped towards her saying something like, “You’re alive!” and as they met, they grabbed each others’ hands and began to dance around each other in a wildly chaotic fashion.

I stood with 8, bemusedly watching the two of them. They had so much energy and they danced and played. Jumping over each other and playing tag and who knows what else. Their play didn’t seem to follow any rules that I could discern. They were just energetically being together and it was a total joy to see.

I turned to 8 and said, “I guess that’s a yes”, and with that I returned from the meditation to normal consciousness, convinced that it was a good idea to get Zing a friend. It was only the next day that it dawned upon me that this was all fine and well… but how would I find THAT friend?

I shouldn’t have worried. We simply followed our hearts, of course.

The next day Lisa and I checked the internet for listings of puppies for sale. We quickly landed on a listing for some miniature Dachshund puppies in a town quite close to where we live. Since I would be driving in that direction to fetch my Spiritual Safari guests the following week, I decided to contact the advertisers. It turned out that they were the most wonderfully warm-hearted people. My kind of dog lovers. We instantly connected over the way we both adored our four-legged children. So I went to meet the pups, and when I arrived one of them just leaped out at me. Literally. He was instantly on my lap and nibbling in my beard in the same way that Zing always used to nibble Gandalf. He was just such a bundle of squirmy, joyous love that I found myself captivated by him.

I took him in my hands to look into his eyes and I felt a shock… a jolt of energy pass through my being. For a moment it felt as if I was looking into the eyes of some amazing being. Like looking into the eyes of an ascended master or a powerful wizard or someone like that. And then that moment passed and he was just a hyperactive little Dachshund puppy again. But I was left in no doubt whatsoever that THIS was the one. But he was too young to take from his mother and I still had two weeks of Spiritual Safari with my visitors that I would later that day fetch from the airport.

Two weeks later Lisa, Zing and I went to fetch our new family member. I was disappointed that Zing didn’t immediately take to him. I expected the same meeting as in my dream. But Zing was disinterested in the new pup.

Then I remembered that in my meditation Zing’s friend had been a little girl. I wondered if I had made a mistake. Perhaps I had somehow got the wrong pup? 8 told me, quite simply, to not be silly and to find some patience. He said that the gender thing is not what I think it is. Anyone can incarnate in a form of any gender, irrespective of their spiritual balance.

So I found ways to try and bring the two of them together. Here’s me in my pyjamas after a long game with the new pup. He fell asleep right on top of me and Zing was willing to curl up with us. It felt like a small breakthrough. But REALLY I should not have worried. Zing was just adapting to his new circumstances at his own pace. When he was ready, he began to play with the pup.

As we got to know our new family member, get a feel for his energy, so Lisa discovered his name. One morning she excitedly told me, “His name is Pikachu!” and you should have seen how Pikachu instantly responded to his name! He instantly knew it!

If you are unfamiliar with this name, it is from Pokemon. Pikachu is a cute little rodent-like character with an electric personality!  And this name just suited him down to the ground.

And so it was that Zing and Pikachu began to find each other. Pikachu instantly adoring his “big brother”, following him around, doing everything he did, constantly inviting him to games… simply melted Zing’s heart. Within a few days they began to play… 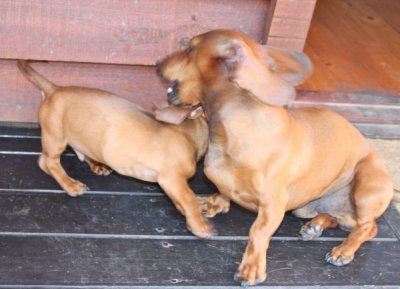 And then, miracles upon miracles, Pikachu took to nibbling Zing the way he used to nibble Gandalf… 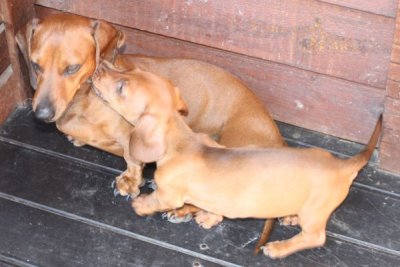 And Zing seemed to get the same kind of a peaceful far-away look that Gandalf used to.

… And then Pikachu proceeded to nap on top of Zing the way he used to nap on Gandalf (well, almost)… 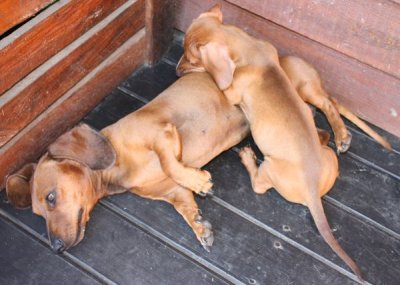 And so I saw that 8 was right. I just needed to find some patience. Zing was transformed. His eyes were bright again, he was full of energy again, he was happy again!

We will always have Gandalf in our hearts, of course, and Pikachu doesn’t replace him. Pikachu is his own whole doggy-person. But we are whole and happy as a family again.

And now, to close this blog post, I will leave you with some egregious cuteness. These were taken of Pikachu a few days after we got him… 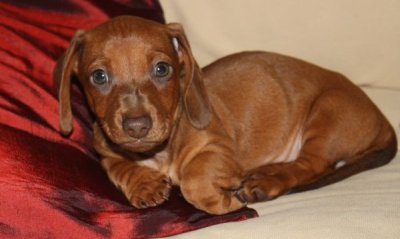 How could you NOT pick that up and cuddle it?

And if you did you’d see that he is totally brown. His nose, his paw pads, his nails… all perfectly brown. 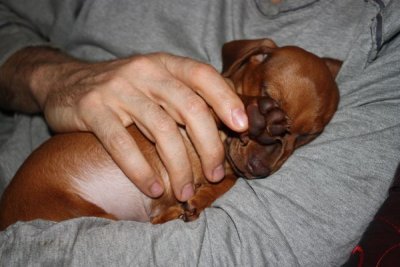 And while you were marvelling at that, you’d notice how very small he is. He almost fits right in your hand… And so there it is. Pikachu’s introduction to the world. I’m sure you’ll be hearing more about him in future blog posts. Until then… one last look into those heart-meltingly appealing puppy eyes… 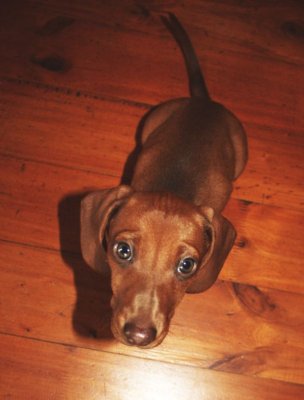