We have 294 guests and no members online

My Dog Zing is Dead

How can I make sense of any of this? My very dearest friend. My little shadow. My… there are no words to express all that Zing meant to me. And now he is dead. Gone. Now there is no more Zing in this life of mine.

And how can I make any sense at all of that?

Then, four days ago I found Zing on the kitchen floor in some pain. He yelped when I picked him up. His back was obviously hurting. I thought he’d pulled a muscle or pinched a nerve or something. I decided to be careful with him and watch him.

Then three days ago, I had to carry him downstairs to relieve himself. And then I noticed that he was unable to move his hind legs at all. That was the moment the first crack showed in my world. That was the first moment I knew something terrible might be happening. We immediately took him to the vet, who confirmed the worst: Zing had a herniated disc. These discs are the little cushions in the spine that allow vertebrates to move. Dachshunds are particularly susceptible to them herniating. When they do, they rupture and put pressure on the spinal cord. Nerve function is lost. Paralysis occurs.

There is an operation that can be done, the vet informed me. My heart, my gut, my truth said “no”. It said this would be wrong. It said I would put Zing through a very traumatic long-drawn procedure and it would not work. It said that this was not an option. And I also have a friend whose Dachshund had this very operation and she anyway had to be put to sleep six months later. But no matter. In this instance. My truth said “no”. I asked the vet what the success rate is. He said variable. He said it sometimes works perfectly. It sometimes works partially. And it sometimes doesn’t work at all. He did some tests and we found there was more than one herniated disc. At least two. Perhaps more. If I had not already made up my mind not to put Zing through the surgery, the vet’s face, as we discovered the multiple ruptures would have convinced me.

The vet gave Zing a pain shot and sent us home with some cortisone to bring down the inflammation. There is an outside chance, he said, that it could help. In my heart, I knew, though, it was just to give me time to say my goodbyes.

I had two days to be with Zing. At first his pain seemed to subside. He was present and alert. His eyes followed me wherever I went. He wagged his tail whenever I came to his bed. He lay on my chest sleeping. We talked. I told him over and over and over again how much I loved him. He licked at my tears. He told me in all of the ways of the secret Zing and Zing’s Dad language that he loves me too. He told me not to worry. He told me all would be well. And he refused utterly to eat or drink anything. He also lost control of his bladder and bowels. Which is probably the only part of all of this that really phased him. Because he really didn’t want to make a mess in the house. He once tried to drag himself with semi-functioning front legs to the door while… Ah. I don’t really want to tell you about that. I just meant to say that he was really trying to be a good dog to the end. And that desire to be “good’ was the only thing that caused him distress in any of this.

And that was what broke me.

I know he was checking out on his own terms. I know, if you neither eat nor drink you have but a few days before you die. I could not. I could not put myself through that. In the end, I decided to put Zing out of my misery.

Yesterday, I took Zing to the vet. Yesterday I held my beloved best friend in my arms and whispered over and over again how much I loved him while the vet slipped a needle in his vein. Yesterday I whispered my very final goodbye in Zing’s ear as mercy carried him away.

And now I am bereft.

Now I can’t make no sense of how this can be. That five days ago I was THERE. And that now I am HERE.

There are transcendent spiritual truths to all this. There is healing. There is growth. There is acceptance. There is the perfection of all things. I know. I mean I really, really KNOW all of that. But for now I am here. For now, I am grief. I am loss. I am sorrow.

And I just wanted to share this with you because some of you knew Zing. And some of you will understand, one way or another, what I am going through. And perhaps recording this will serve some good.

But irrespective. This is the end of something beautiful. When something that beautiful ends, it is worth noting that ending too. And that beautiful thing was the life of a little Dachshund called Zing. His spirit lives on. But the life that soul lived here, as Zing, is over. Gone.

Goodbye Zing. I love you forever. Wherever you are and wherever you may go. Always I will be here, loving you. And I miss you dreadfully my spectacular little friend. 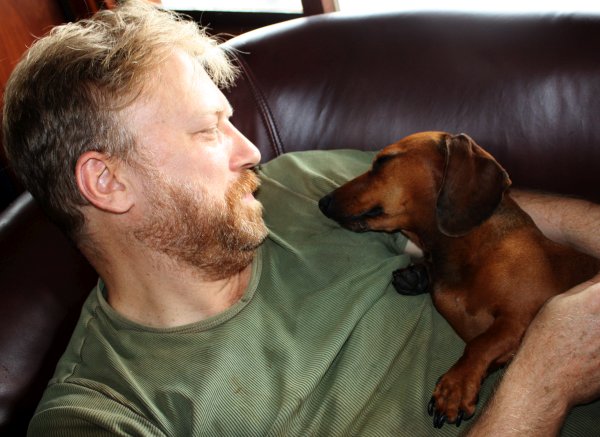 This picture was taken some months ago. I was wearing a dirty old work t-shirt, as you can see. I came in to take a rest. Zing came to rest with me.